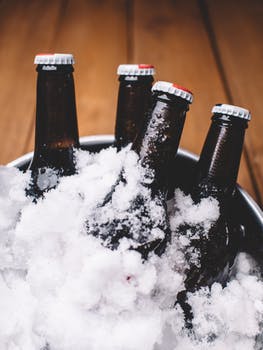 The short answer is… nothing in most cases

It’s an old wives’ tale we’ve all heard. Likely you were in high school and had a friend with a car who had an older brother, and that older brother could buy beer. Everyone went to someone’s house whose parents were out of town, and the crew drank as much of this beer as they could.  What was left was put into the trunk of this kid’s car. He drove around with it for a week, and the next weekend it was put into the fridge of someone else’s unsuspecting parents. Inevitably, someone who grabbed a beer that night would say, “Ah man! The beer got skunky!”. Sound familiar? It is a worldwide myth that somehow temperature cycling “skunks” beer.  The truth is that temperature cycling has little to no effect on beer freshness.

Think of it this way, if cold beer warming and then cooling again a single time ruined it, then all beer imported from Europe would be destroyed before you bought it. On its long journey across the Atlantic, this beer has likely changed temperatures several times, yet it is pretty easy to find non-skunked imported beer. The reason why? Skunking doesn’t come from temperature swings. Our next post will cover where skunking does come from, but for now let’s focus on temperature.

Temperature does affect beer.  However, it is not temperature cycling that destroys beer, but exposure to warm temperatures. Beer is best preserved when kept cold… kind of like milk. A gallon of 2% will last a lot longer in your fridge than on your kitchen counter. Much the same way, keeping beer refrigerated will keep its flavor as the brewer intended for much longer. Keeping beer at room temperature can drop a beer’s shelf life from nearly six months to only a few weeks, and exposing the same beer to very warm temperatures can affect its flavor in a matter of a couple of days. The good news? It can never make you sick. It just might not taste very good. Hop flavors and aromas will be diminished, first. Malt flavors that used to remind you of chocolate and caramel will begin to meld into a generic sickly “sweet” flavor, and in some beers reminders of wet cardboard and paper can develop. Not pleasant, but none of this will remind you of a skunk.

So, the moral of the story is to keep your beer cold when you can, but don’t worry about beer warming up and then cooling again. It’s totally fine to drink it, and as long as it wasn’t kept warm for too long the flavor likely wasn’t changed.

If you’d like to learn more about beer, check out one of our brewery tours on your next visit to Asheville.

Oh, and if you work with beer and need a few pointers, check out our post on things bartenders should know about beer.

5 thoughts on “What happens when cold beer warms up and is cooled again?”