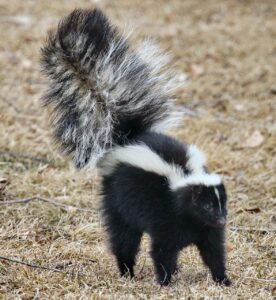 Last time, we talked about the affect of changing temperature on beer freshness. We mentioned the old wive’s tale about letting cold beer get warm and then chilling it again somehow “skunking” it. While this isn’t true at all, today we will talk about the real cause of skunking. Spoiler alert… it is caused by light.

What happens when light hits beer?

All beers are brewed with hops. Hops are the ingredient that lends bitterness to beer, helps preserve beer, and in some styles lends a lot to the flavor and aroma of the beer. One of the compounds in hops that helps to lend bitterness to beer, humulone, is the culprit when it comes to beer being hurt by exposure to light.

During the boil, humulone’s shape is changed. It is isomerized, a chemistry term meaning that the bonds inside the molecule have been rearranged. After this isomerization has happened, the compound is called iso-humulone. If iso-humulone comes into contact with UV light, commonly found in sunlight and fluorescent lighting, a reaction occurs that creates a chemical called 3-methyl-2-butene-1-thiol, or 3-MBT. Unfortunately, 3-MBT smells almost exactly like skunk spray, changing the aroma of the beer dramatically. Even worse, this reaction can happen in a matter of minutes.

How do you keep it from happening?

So, what can you do? The only way to protect beer from skunking is to keep it away from UV light. This means using LED lights in beer coolers, or applying UV blocking film to fluorescent lights. Keep beer displays in stores away from windows, unless those windows have UV blocking film on them. Beers in clear and green glass are most susceptible. Green glass only blocks about 25% of the harmful rays, and clear glass doesn’t block anything. Brown glass is fairly effective, blocking 98%, but you can still skunk a beer in brown glass (trust me, I’ve done it). Of course cans and kegs offer 100% protection, but not every brewery offers every product in cans.

Can I un-skunk my beer?

No, unfortunately once this compound has formed it is there and won’t disappear. The human threshold for 3-MBT is very low, meaning even a tiny amount will be detectable. And, as we mentioned before, it only takes 10-15 minutes of direct UV exposure to skunk a beer. Now, there is some good news. While humans are very sensitive to 3-MBT, we also get used to it very quickly. So, if you end up with a skunky beer that you still want to enjoy, just keep smelling it. After a few minutes of constantly sniffing your beer, you won’t notice the skunk aroma anymore.

If you’d like to learn more about beer and brewing, check out one of our brewery tours. If you can’t make it to Asheville, keep checking in here for more BREW-ed.